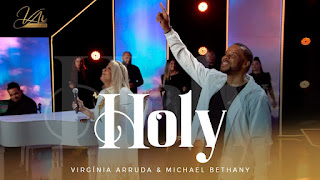 On March 18th 2022, Virginia Arruda released the song “Holy” on all digital platforms with the participation of singer Michael Bethany, one of the lead singers of Gateway Worship. The recording took place at the end of last year, where the singer came directly to Brazil from the United States, especially to participate in this project. Two new songs were recorded for the album, the second single will be released soon. Listen to SANTO on digital platforms.

Virgínia Arruda is a great bet for gospel music in Brazil for the next few years. She is also a bishop and creator of “Word of the Day”, which transmits devotional messages to her followers through YouTube and social networks, today she has more than 200 million views spreading the Word. This year, Virginia comes with force in the musical part, presenting her new project “Tua Graça Me Alcançou”, expanding her path to the Brazilian public and opening herself to the international public.

“When I adore you, you open the sea, when I praise your name, victory is guaranteed. When I adore you, I give you all my praise, oh lord,” Virginia and Bethany sing in excerpts from the song, which is an English version of the singer’s “Adored” song.

A native of St. Louis, Missouri, Michael Bethany attributes his passion for music to his family’s legacy. One of six siblings, he started out in his father’s church and quickly became an accomplished vocalist, songwriter, and performer. Appearing on stage in Tyler Perry’s hit play, “I Can Do Bad All By Myself,” Michael has continued his career producing, singing, writing and touring. In 2005, he moved to Dallas, Texas to join award-winning artist Fred Hammond’s team.

Today Virgínia Arruda reaches more than 110 countries daily, through her YouTube channel where she ministers the Biblical Word in addition to praying and studying daily with her followers, she is an extremely important figure when it comes to directing and directing the God’s word. On her Facebook, she has almost 150,000 followers of her fan page and on YouTube almost 1 million subscribers watch her daily. On this platform, the bishop was the creator of the “A Palavra do Dia” board, which leaves positive and important messages for those who need it, and her official channel has already surpassed the important mark of almost 200 million views. “I have been generating daily content for six years to reach people. It has never failed and that is very important for people. My company taking the word of God is what saves many people from a bad day”. On Instagram, organic engagement is gigantic: more than 400,000 followers follow Virginia’s posts, surpassing, in some cases, the barrier of one million accounts reached.

In addition to being part of the Daystar Singers and Band, Michael also serves as part of the worship ministry at Gateway Church for Pastor Robert Morris. In 2016, he released his first album Yours Forever. He has also launched his own non-profit organization, Global Worship Ministries. Michael and his wife, Chavon, have been married for 15 years and have two children.